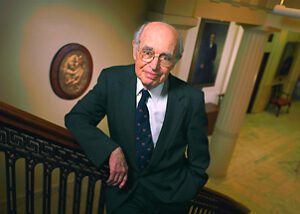 Julius Benjamin Richmond was born in Chicago on Sept. 26, 1916. He received his B.S. and M.D. degrees from the University of Illinois and was a flight surgeon in the Army Air Forces in World War II. Afterward, he taught pediatrics at his alma mater before moving to Syracuse.

Dr. Richmond, a pediatrician whose work on cognitive development in poor children led to his being the first national director of Project Head Start, which is widely regarded as one of the most successful social programs. Later as surgeon general, he was a fierce adversary of the tobacco industry. Dr. Richmond produced a 1979 report called “Healthy People: The Surgeon General’s Report on Health Promotion and Disease Prevention,” setting out, for the first time, health objectives for the nation as a whole.

In the late 1950s, Dr. Richmond chaired the pediatric department at the State University of New York College of Medicine at Syracuse (now Upstate Medical University).

In the early 1960s, he and his colleague, Betty Caldwell, began studying the interactions of parents and very young children in low-income families. The two set about seeking support to experiment with children, putting half into an early daycare program. Their research led Sargent Shriver, President Johnson’s newly appointed director of the Office of Economic Opportunity, to ask Dr. Richmond to oversee the new program called “Project Head Start.” Head Start intended to provide preschoolers from low-income families with educational daycare as an eight-week summer program. In six months, Dr. Richmond brought it to fruition, staffed by thousands of volunteers serving more than half a million children. The program has now helped more than 20 million children. The Head Start program, a triumph for advocates of early intervention in childhood, was a focal point of President Lyndon B. Johnson’s War on Poverty and an extension of work by researchers like Dr. Richmond.

In 1967, he returned to Syracuse as dean of the medical faculty. In 1971, he moved to Harvard, where Dr. Richmond held positions at the Harvard School of Public Health (HSPH), Harvard Medical School, and the Harvard Kennedy School. HSPH’s highest honor is named for him — the Julius B. Richmond Award, which recognizes individuals who, like Dr. Richmond, have promoted and achieved high standards for public health conditions in vulnerable populations.

Joseph A. Califano Jr., the secretary of the Department of Health, Education, and Welfare, under President Jimmy Carter, asked that Dr. Richmond return to Washington as surgeon general and assistant secretary of health.

As Surgeon General, he pushed for more significant financing for children’s health, initiated a campaign to curtail the use of sleeping pills, and approved marijuana pills for cancer patients undergoing chemotherapy. In 1979, he took a stand against the Immigration and Naturalization Service, which prevented gay people from entering the country based on a 1952 law that barred their entry. The law called for psychological examinations by the Public Health Service. Dr. Richmond ordered the health service not to perform the examinations, noting that in his organization, “homosexuality will no longer be considered a ‘mental disease or defect'” and pointing out that homosexuality was not determined through medical testing. A vigorous antismoking campaigner, Dr. Richmond produced several Reports of the Surgeon General on Smoking and Health that declared “overwhelming proof” that tobacco caused lung cancer. His four reports on smoking and health included a 2-year focus on smoking-related problems unique to women in 1979. Another 1979 report was considered the most comprehensive review of health effects of smoking ever published, and the first Surgeon General’s report to carefully examine behavioral, pharmacologic, and social factors influencing smoking; to consider the role of adult and youth education in promoting nonsmoking, and to review health consequences of smokeless tobacco. His report identified smoking as “one of the primary sources of drug interactions in man.”

Dr. Richmonds 1980 Report of the Surgeon General, entitled “The Health Consequences of Smoking for Women,” Reviewed evidence that strengthened previous findings. The report projected that lung cancer would surpass breast cancer as a leading cause of cancer mortality in women. It also Identified trends toward increased smoking by adolescent females.

His 1981 report, The Health Consequences of Smoking–The Changing Cigarette, examined the health consequences of lower tar and nicotine cigarettes. They noted possible risks from additives and their products of combustion. The report touched on compensatory smoking behaviors that might reduce the potential risk of lower-yield cigarettes—emphasized that there is no safe cigarette. The report suggests that any risk-reduction associated with lower-yield cigarettes would be small compared with the benefits of quitting smoking. 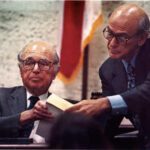 In his 80s, he testified in two flight attendants’ trials that secondhand smoke was responsible for their ill-health.  One of those cases led to a $300 million settlement in 1997 that included founding the Flight Attendant Medical Research Institute (FAMRI). Dr. Richmond served as Chairman of the FAMRI Medical Advisory Board from the inception of FAMRI until he died in 2008. In the second case, Engle, a class action on behalf of Florida smokers, a court awarded $145 billion in punitive damages against six tobacco companies, the most significant such award in history. Engle prodigy cases continue to this day.

In 2006, with the support of FAMRI, the American Academy of Pediatrics (AAP) established the Julius B. Richmond Center of Excellence, dedicated to the elimination of tobacco and secondhand smoke exposure of children. The AAP Richmond Center provides the education, training, and tools needed to effectively intervene to protect children from the harmful effects of tobacco and secondhand smoke.